At Our P&C... leveraging school events 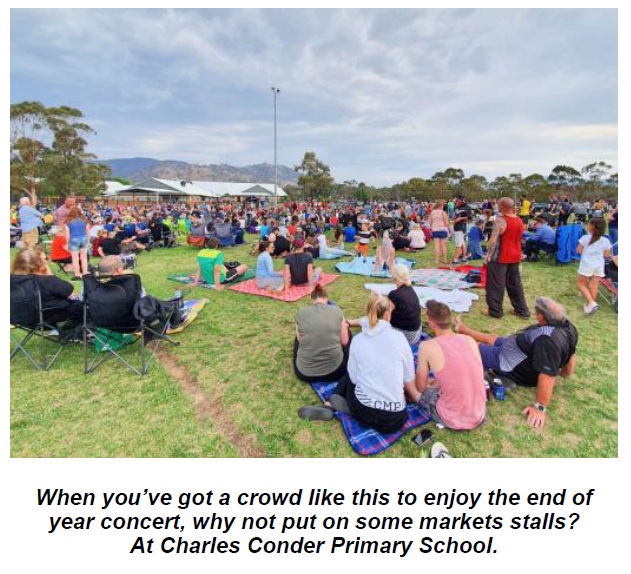 Instead of a full-scale fete, some P&Cs are leveraging smaller, more focused events to create many of the same benefits.

Fetes and fairs are wonderful events for the whole school community. There’s an air of collective spirit, fun and solidarity. It’s an important way in which parent associations create social capital and gather community support for the school. Of course, they are also excellent fundraisers. But fetes are also a lot of work and as the volunteer planning effort increasingly falls on the few, it’s worth looking at some alternative events with many of the benefits, but a smaller workload.

At Neville Bonner Primary, an annual book fair is the focus of a great community day. It’s an opportunity to run the reliable fundraising stalls – the BBQ and cake stall – while promoting literacy.

“We’ve run the book fair since 2017 and it is a great fundraiser,” said P&C President Kylie O’Keeffe. “Most of the funds come from the cake stall and sausage sizzle, but it is not all about the money. It’s also for the sake of having a community event, inviting people into the school and building community. People come along and just hang out.”

“The kids love it. They volunteer to help too, which is safe and useful on a book stall, compared to a BBQ. They can get involved and spend the day there. It’s great to be selling books, not just sweets. It’s really positive for the kids.”

“Now that we have run it a couple of times it has become really easy. We have left over books from last time, sorted into categories and stored in clearly labeled containers. We add books to the right container as they are donated during the year and then we can put the event together in just a couple of weeks,” Kylie explained.

“Over the years we have bought tables as well as generic core-flute signs – “book fair this weekend” – to help us advertise the event. We spend a day sorting and pricing using colour-coded stickers,” she said.

Another important ingredient for success is the involvement and support of the school and staff.

“The school is really supportive of everything we do, but especially the book fair. Last year, the teachers did a little promo skit at an assembly – the kids thought that was hilarious. And they make sure we have the storage space we need too.”

Another tactic is to create your event around stalls which other people provide. The car-boot sale is a classic – charge people around $25 for a site at your event to sell their second hand goods while you sell food and drinks, and a cake to take home, to the crowd that follows. Promoting the event well is key to success.

At Charles Conder Primary, the focus was a Christmas market where stall holders were invited to sell their wares and the community turned out to do some Christmas shopping prior to the school’s end of year concert. Adding onto school events like this is smart because you capitalise on a captive audience and you don’t have to do so much advertising.

“We have a very small committee,” explained Amy Arnott, P&C President at Charles Conder. “In trying to re-vitalise what we do, re-create our enthusiasm, we thought, ‘we don’t have to do it all ourselves - why don’t we outsource?’”

“We’re not looking to make millions of dollars, we just want to raise something for the school and create an event for the community, something that can involve everyone, that every student and parent can get something out of,” Amy said.

“We are very community focused, so we looked at the other community groups around us. We offered the BBQ to the Tuggeranong Bulldogs footy club, in return for a sports kit for the school. The Tuggeranong Men’s Shed ran a potato on a stick van, and we had other food vendors who we charged $40-60 for the site.  We got something out of it, and they made the funds they needed too. And by outsourcing, the committee members got the chance to enjoy the evening, watch our kids in the end of year concert, rather than cooking sausages.”

“We had 20 market stalls in all, with all sorts of items – candles and cards and treasures from grandmas who knit. We charged $20 for each of the non-food stalls. It adds up quickly!” she said.

“I’ve also found,” said Amy, “that while parents don’t want to take on a big role, if you can break it down to small, specific jobs, people will do it.  You can get a lot done that way.”

There are plenty of opportunities for P&Cs to add on to existing school and community events. Several years ago, Amaroo School added art and plant stalls – one per class – for parents to enjoy and purchase their child’s creations after their end of year awards ceremony.  If your school is a polling place, the upcoming ACT election on October 17 is the perfect time to put on a few stalls and feed the voters coming to you. The crowds do come early, though, so it is worth being there when the polls open at 8am with egg and bacon rolls and a coffee ready to sell.

This article is part of a series "At Our P&C..." sharing great things that ACT P&Cs are doing and appeared in ParentACTion Magazine, Term 1, 2020.