A group of Canberra Mums is helping seriously sick children across Australia stay connected with  school by placing robots in their classrooms.

There are tens of thousands of sick kids in Australia who miss school often or for long periods due to their illness. According to Megan Gilmour, Chair of the Canberra-based charity ‘MissingSchool’, sick children can fall behind academically and experience isolation from their school communities.

“This leaves lifelong effects on productivity, and social and emotional wellbeing,” she said. 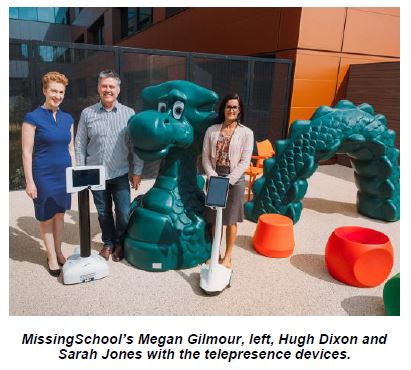 MissingSchool looked for technological solutions. It is now running a pilot scheme to place telepresence robots in willing schools to demonstrate that continuous two-way connection is possible between seriously sick children and their classrooms when they are absent.

“Telepresence allows kids who are away from school to dial in and be seen and heard in their classrooms, move around, and learn from their teachers with their classmates. The pilot is intended to be a catalyst for long-term solutions for sick kids that integrates connection between hospital, home and school.”

The Australian-first pilot is supported by a grant of up to $600,000 over three years from St.George Foundation. The grant will help MissingSchool roll out at least 75 robots over three years to demonstrate cost effective and innovative ways to include sick kids in their regular schools.

“I pitched this idea to St. George Foundation from the Netherlands, while on a Churchill Fellowship in countries using similar solutions at scale – I know that Australia can take this leap for sick kids,” Megan said.

ACT Education Minister Yvette Berry agreed last year to a trial, making the ACT the first jurisdiction in the national pilot. Chief Minister Andrew Barr joined the announcement, affirming the ACT’s push to strengthen inclusion and innovation in ACT schools and its leadership in school connectivity and digital transformation.

The pilot is now eight months in and has already placed robots in schools or for testing in most Australian states, with operational support from education departments in those jurisdictions.

MissingSchool is a volunteer not-for-profit established in 2012 by three Canberra mothers whose journeys with their own children identified the need for better everyday support for sick children in maintaining contact with their schools and learning.

“Parents and carers in this situation worry about their kid’s education and struggle to pull together the academic and social connections they need to overcome isolation and falling behind,” explained Ms Gilmour.

“Medical science is saving and prolonging the lives of sick kids and we must act now to give them real-time inclusion in their classes and connection with their friends and teachers, to have hope and build positive futures.”

“The approach MissingSchool is pursuing is intended to combine the strengths of government, the private sector, and not for profits to demonstrate a solution that sees sick kids connected to their classrooms, everywhere in Australia, every day.”