At our P&C... Forrest traffic system

Traffic problems plague many of our schools so the Council team caught up with Forrest Primary School to see first hand their drop-off and pick-up solution that has worked smoothly for years.

Traffic problems plague many of our schools so the Council team caught up with Forrest Primary School to see first hand their drop-off and pick-up solution that has worked smoothly for years.

Council staff arrived at Forrest Primary School well before the 3pm pick-up rush. Even so parking was hard to find in this central-Canberra location. This didn’t bode well. But when 3pm — and parents — arrived, cars formed orderly queues and traffic moved on, slowly but steadily, in a way which utterly amazed us, given our daily struggles with traffic at our own schools. 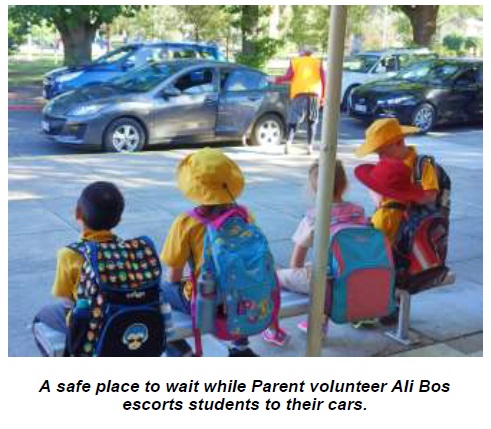 There are two pick up areas at Forrest, each three cars long – one for juniors and the other for senior students – at opposite ends of the semi-circular roadway that loops past the front of the school. The kids wait and chat to their friends in shaded areas with plenty of seating until their family vehicle arrives and stops in the pick-up zone. Staff and parent volunteers call them over, open the car door and farewell them. The cars move off and the next three cars pull in.

“It can be a bit hectic,” the teacher on duty told us, “but it is a lovely way to finish the day, saying goodbye to the kids.”

If the kids aren’t there when the family car pulls up, the car is waved on to complete a circuit of nearby streets and return to the end of the queue which stretches some way down the main street away from the school. Clear road markings, however, keep the two queues of cars (juniors and seniors) to one side so that there is still space for through-traffic.

The roadway that loops 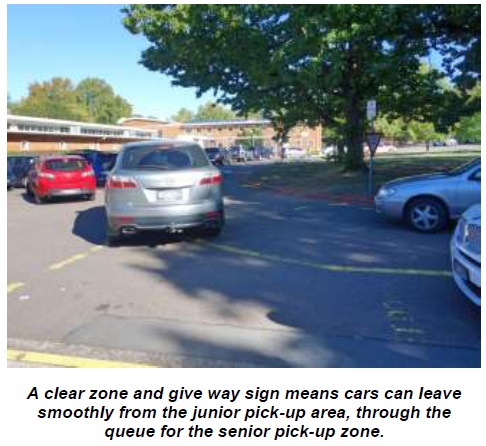 We asked Principal Chris Pilgrim, in between her approaches to cars for a chat, how such a feat of compliance is possible.

“We are very grateful to everyone who does the right thing,” she said. “We have reminders in the school newsletter and it is also on our website and school App. It works well 99% of the time.” She says that new parents do need to be informed and that if she, or other staff, approach a vehicle doing the wrong thing, the emphasis is on the safety of the kids. “You’ve got to be beautiful and kind, not mean,” she explains.

It wasn’t always this orderly, apparently. Some years ago cars parked right round the circle, and on the median strip and traffic island, jostling to leave as other kids walked to their cars. “It came to a head when two kids were clipped by a reversing car” explained long-time parent Alison Kobal. “A round-table was set up with the police, ACT roads and the National Capital Authority” (as the school is in the parliamentary triangle). A “very driven mother” designed the basics of the system which were then refined at the roundtable. It then took about a term to start to run smoothly. According to Alison, clear signage and road marking were essential, as was having the pick-up zones staffed. 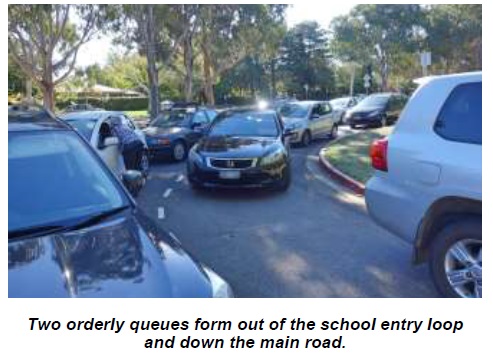 A teacher is placed on duty at both the junior and senior pick-up zones, as well as at least one parent volunteer at each. Parent Ali Bos, this year’s co-ordinator of volunteers, says that they only have about half of the volunteers that they really need. “We all wear the hi-vis vests, but the teachers are the ones that mostly ‘move on’ cars and I think that is important,” she said.

How to teachers find it? we asked Chris Pilgrim. “It is another duty for teachers but they are glad to have the kids safe. On rainy days, they are here with big umbrellas – it’s a real service.” ●

Editor’s note: Following pressure from Council the ACT Government has promised to create traffic management plans for each ACT school. We are hopeful that this process, involving relevant roads and policing authorities, will bea chance for schools to create systems as effective as Forrest’s.

This article is part of a series "At Our P&C..." sharing great things that ACT P&Cs are doing.