At our P&C... Fraser Friends

How can you get more parents involved? It’s a perennial question. We took a look at a friendly approach that is working at Fraser Primary.

Two years ago Fraser Primary Principal, Sue Norton, was looking for ways to involve more of the parent community in the school. Her new initiative – one that is still going strong today – was ‘Fraser Friends’. 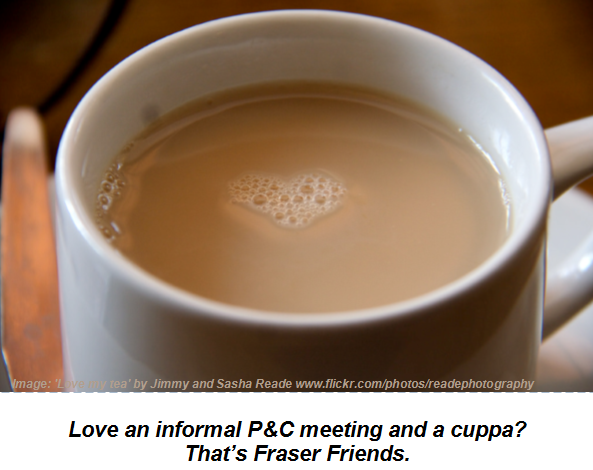 “Fraser Friends is basically a fun version of the P&C meeting,” explains Alois Tusch, the school’s P&C President, “without the reports and formalities.”

“The Friends meet on the same day as the P&C meeting. Sue gives her Principal’s report, just as she would at a regular P&C meeting, and then there is a chance for parents and carers to flag issues, raise problems and ask questions.”

Council’s surveys of P&Cs in the past have shown that what people value most about being on the P&C is being informed about what happens at school and connecting to school staff, especially the principal. In effect, the Friends meetings make these most valuable aspects of the Fraser P&C meetings available to a greater number of people.

“Toddlers and babies are welcome and toys are available for them to play with. The meetings are held around 9am, straight after school drop-off, so it suits different people to those who come to our evening meetings,” says Alois.

“It’s a beautiful addition to our P&C and a lot of good ideas come out of it! As P&C President, I try to get along as often as I can and often matters raised at the Friends meetings are then brought to the P&C.”

For Sue, the meetings are a valuable way of capturing the input of as many people and as many points of view as possible. “It’s a place to talk about the vision of the school and a forum for ideas, a way for parents to know what is happening and to get involved in decision making at the school.”

“I get feedback on initiatives that we are considering and a lot of new ideas too. Because of the informal setting, parents don’t feel bashful about asking what might feel like a silly question – questions they might not feel they can ask at a formal P&C meeting.”

According to Sue, attendance at Fraser Friends varies from as few as three to as many as 20 people. “It is about building confidence. After a while, the people who came started to run things. One parent ran a movie night, another organised school celebrations of World Teacher Day.”

When asked if effectively having two P&C meetings was a valuable use of her time, Sue says a definite ‘yes’.

“Many of the school’s best new initiatives have come from our discussions at Fraser Friends. I value our conversations and those parents feel valued.”

This article is part of a series "At Out P&C..." sharing great things that ACT P&Cs are doing and appeared in ParentACTion, Term 1, 2017.