Paul Magarey has organised a school bike ride at Lyneham Primary for the last five years. Here he tells how it has become a major fundraiser, as well as a highlight in the school’s calendar.

We call our annual whole-school bike ride the Tour de Lyneham and we try to make it like the Tour de France – parents and staff with bells and whistles all along the circuit and chalk graffiti on the paths. A few times, we've had a parent out there in the Lyneham wetlands blowing a trumpet. The kids are certainly entertained, as they ride, by the antics of the parents. It’s a carnival atmosphere. 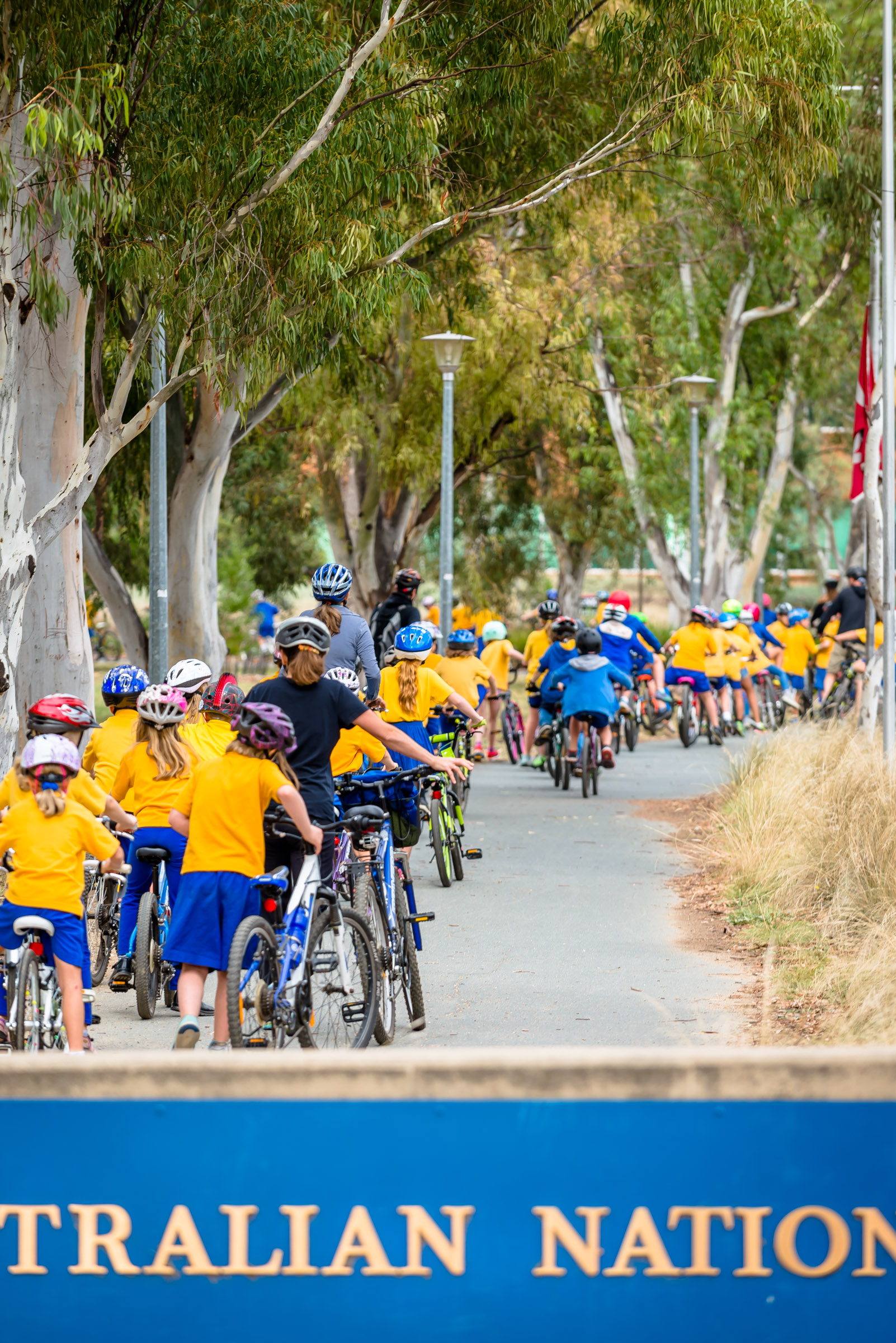 I’ve run the last five Tour de Lyneham rides and it gets bigger and better every year. A parent who wanted more exercise, Michelle Baron, came up with the idea seven years ago and ran the first few events after convincing the P&C a school bike ride was a good idea. It started as a ride around the oval, but we soon expanded to a circuit around the Lyneham Wetlands and beyond. This year the juniors rode around the Lyneham wetlands, students in year three and four rode to the botanic gardens and the year fives and sixes went to the museum.

This year, we made just under $10,000. This mostly comes from sponsorships raised by the students themselves, with some money coming from running a sausage sizzle on the day (we also serve fruit for morning tea). We send home sponsorship forms with all the kids in week six of first term so the kids can ask people they know to sponsor them before the ride in week 10. To motivate everyone to get sponsors and promote the event, we offer prizes to the students who gather the most sponsorship. In the past, to make it more equitable, we had a raffle where there’s a ticket for each $5 you collected in sponsorship money, but there were complaints from parents of students who'd raised lots of money who lucked out on the raffle. We make sure there are good prizes – bikes, scooters, balls and so on – and promote them well. This year we also got half-price vouchers from an indoor trampolining centre, so every child who brought back their sponsorship form got one of those as well.

We also talk up the event by getting guest speakers to visit the school. I interview them in front of the kids and ham it up for a bit of fun. We’ve had the local bike mechanic who was also a member of the Australian downhill mountain biking squad who did crazy stunts for the kids and told us he rode better without his glasses on because he couldn't see what danger he was facing; a parent who held the world record for the 24 hour mountain bike race who demonstrated (not in reality) how to go to the toilet while on his bike; and ACT bicycle police who had sticky tape holding their back lights together and who also joined us for the actual ride for some of the way.

The hardest part of running the Tour de Lyneham is organising the volunteers, though it is a lot easier since I discovered the website volunteersignup.org which is a great tool for getting your rosters sorted. We continue the fun with the names for the various volunteer rolls – the ‘fruit bats’ cut up the morning tea, the ‘coffee mugs’ get drinks for all the adult volunteers and the ‘big spenders’ go and buy supplies. We even assign someone the task of being roving photographer for the day.

We have a designated first aid officer along the ride and a lot of parents to go along to ensure safety – one adult rider for every 10 students — so it is a challenge to get enough helpers. For three years now, we've had students from Lyneham High School come to help as part of their community service which has really solved our volunteer worries.

We now hold the ride on the last day of the term. This fits well with the school as a fun activity to end the term, and the end of term one is a good temperature for the ride.

We ask parents to fill in an evaluation survey each year and have had some great feedback for more improvements. Next year we are looking to link the event to the curriculum – for example, maths regarding the sponsorship money or amount of CO2 saved by riding, and the mechanics of bikes. Along the way we’ve developed a project plan for running the event which we are happy to share with any other P&Cs that want to give it a go in their school too. ●

This article is part of a series "At Our P&C..." sharing great things that ACT P&Cs are doing and appeared in ParentACTion, Term 3, 2016.