After more than two years with few opportunities for fundraising or community events, it was a delight to see the success of P&C-run election day stalls across Canberra in May. 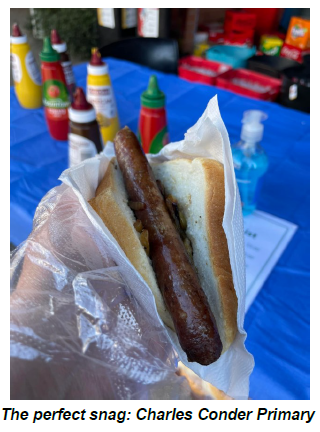 The Democracy Sausage has become something of a cultural icon in recent years with voters almost as interested in the BBQ options as those on the ballot paper. And P&Cs have been thrilled to oblige, with sausage sandwiches for all and an increasing array of other stalls and options.

“It’s a great opportunity to fundraise from a broader section of the community,” notes Alison Elliott, Council President, “rather than reaching time and time again into parents’ pockets. It’s a wonderful social day too, a chance for the school to take its place as the centre of the local community.”

So it was great news to many P&Cs when Council  announced in April, following talks with the Education Directorate, that election-day stalls could be run at public schools with relatively few restrictions.

To help everyone out, we provided a template COVID-safe plan, and the opportunity to be part of a mega list of democracy sausage sites, which the media devoured and helped spread the word!

At least 55 P&Cs held stalls at school polling places. P&Cs took the opportunity to provide coffee carts, ice cream vans, cake and plant stalls, raffles and games for kids on top of all the sausages, and halal and vegetarian BBQ options. From all accounts it was a huge success, and not just financially.

Our Canberra P&C Leaders Network closed Facebook group was a great place to crowd-source answers to the pressing questions in the lead up to the event: where to buy onions, how to label cakes, suggested pricing and how many sausages to buy! 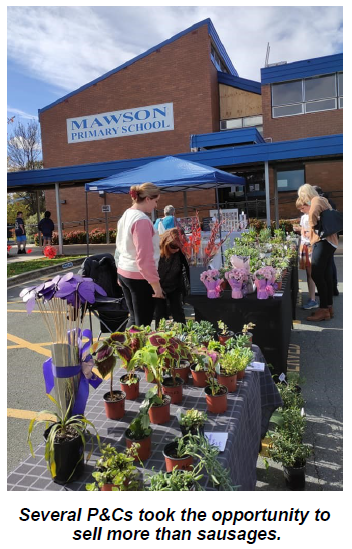 “We had a fantastic day at Evatt Primary,” said Dani Davis, P&C President. “It was successful on a financial front as well as community engagement.”

“Monash made $3100 from a BBQ and Cake Stall. We were over the moon!” P&C President Jess O’Callaghan told us.

At our May General Meeting we were pleased to hear that most P&Cs had exceeded their fundraising goals. Overwhelmingly, P&Cs also reported that they had great support from the local community and the school, and that they had reconnected with volunteers who enjoyed the day. Overall, it had been a morale boost for all those involved.

“It was a huge day for Mawson Primary and the P&C,” said Olga Rogachev, P&C President, “with 1100 sausages, 850 dumplings and multiple cakes sold!”  Mawson went all out, with BBQ, cakes, Artisan Market, coffee van and live entertainment.

We also heard many reports of people making donations to the P&C, or saying “keep the change” when buying sausages.

“We had an amazing community response to our stall,” reported Kate Hamilton, Chapman Primary P&C President. “There were longer queues for the sausage sizzle than for voting, many people were just turning up for the sausages and cakes! ... Thousands of dollars have been raised.”

“One of the best outcomes was having our volunteers on site, chatting and getting to know one another. It gave all of our P&C committee a huge boost to see the school community coming together.”

Council looks forward to helping make the next election equally successful for our members.