How do you host a great night for the school community and raise funds at the same time?  Put together a great P&C team, add support from the school, some personality and hijinks, plates of tasty food and – Bingo! – job done!

Macgregor Primary School is still smiling after their third annual Bingo Night, held in June. The night is the brainchild of the P&C’s fundraising ‘Queen’, Tracey Barker. 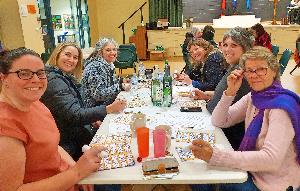 “It was such a great night, each year it gets bigger as the word spreads,” said Eleanor Bates, P&C President at Macgregor.

“It’s about bringing parents – and others from the broader community – together for a fun evening. For many parents it’s a great night out, and this year there was such a sense of enjoyment to be able to go into the school once more,” she said.

Players paid $15 for entry (or $90 for a table of six) which included one bingo book of 10 games and stamper.

“Most people purchased an extra book or two on the night, for $10 each, for more chances to win,” Eleanor explained. “At the half-time break we had some coin-toss games for a little more fundraising, and there was a raffle as well.”

Two prizes, sourced from donations, and some purchased by the P&C for the event, were given out for each game – one for the first player to complete a line and a larger prize for the BINGO! (complete game card).

But the most important ingredient for success? A lively bingo caller!

“For most people there, it wasn’t really about the prizes, it was about helping the school and having fun, and that was guaranteed by our amazing bingo caller – Bronwyn. She’s one of our Mums and is so much fun,” said Eleanor. “She makes up her own calls, with references to current affairs, or local in-jokes, and the odd risqué call!”

Everyone was encouraged to participate. 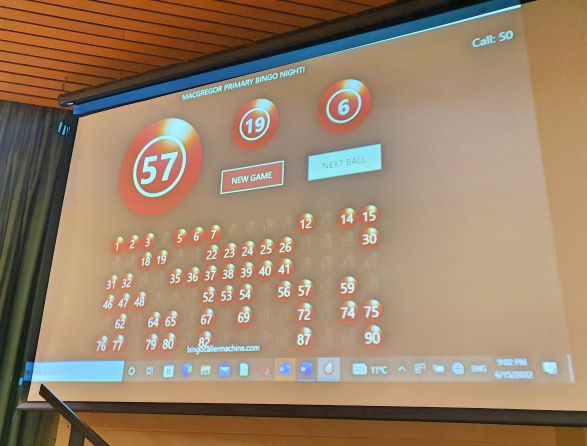 “On each table were copies of a couple of calls and responses, so when a particular call came up people could jump up with the response. One call referenced Dr Who, and the response was a chorus of ‘Exterminate! Exterminate!’. A call of 30 resulted in singing ‘Tiptoe through the tulips’ – there are 30 days of Floriade. There was a lot of laughter and freddo frogs as participation rewards.”

“The school and our wonderful principal have also been hugely supportive. We are very lucky, with staff filing three tables,” Eleanor said.

The P&C-run canteen offered food for the evening, including homemade treats like sausage rolls, mini sweet potato and feta quiche or pumpkin soup, plus old favourites like potato wedges.

“Overall, I think it is less work than a trivia night – no need write and check all those questions,” she said. “We used an online program to generate the numbers.”

“It was a great night in terms of fundraising. We made a profit of over $1000 on the tickets and coin toss, plus the canteen made a small profit on the sales of food, making about $300.”

See more from the night on Macgregor P&C’s Facebook page.

This article appeared in ParentACTion Magazine, Term 3, 2022.  It is part of a series "At Our P&C..." sharing great things that ACT P&Cs are doing.