Congratulations: Our Friend of Public Education

Kirsty McGovern-Hooley has long been a passionate friend of public education. That has now been formally recognised in a Public Education Week Award from the ACT Education Union. 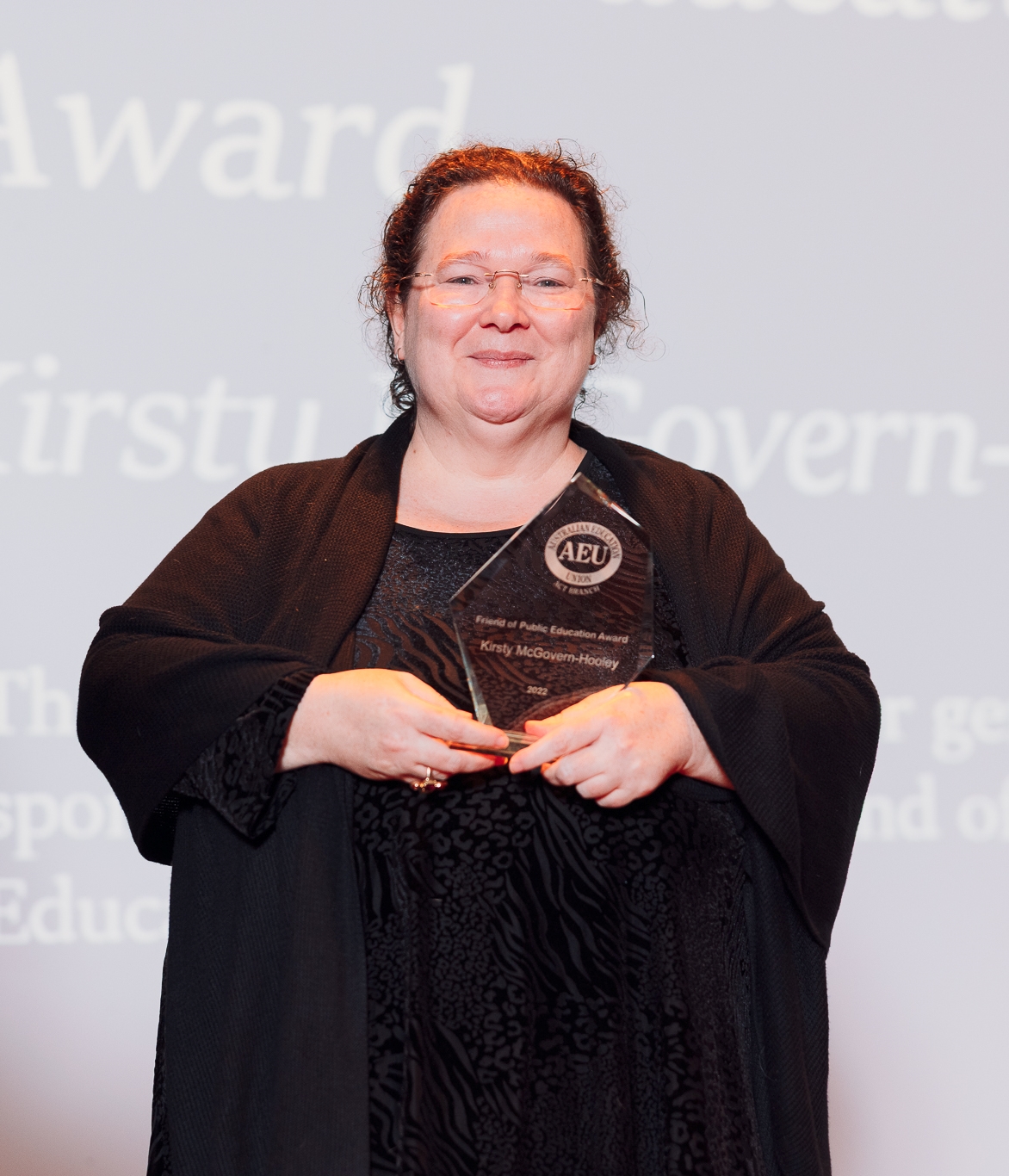 In presenting the Friend of Public Education award, AEU President Angela Burrows recognised Kirsty as a steadfast proponent of parent and student voices in public schools, notably during her time as the President of the ACT Council of Parents and Citizens Associations.

Kirsty has been involved with Council, as a parent representative and advocate since 2013, and finished up a busy, and very productive, three year stint as Council President in 2020. She is also a long-term P&C member, serving as Treasurer and President at Farrer Primary School P&C.

Kirsty was thrilled to receive the much-deserved award.

“P&Cs – and their volunteers - are in this game because we want to make schools better. If teachers are supported and happy then we are going to have better classrooms and a better experience for our kids. When parents and teachers are on the same page, then we can do amazing things - I really believe that.”

“So this award is really special because it’s actually being named as a friend of public education. And that’s what I’ve always tried to do.”

“Sometimes I feel like I’m a critical friend,” she adds, laughing, “but that’s an important part of it too.”

Over the last decade, Kirsty has worked with determination and passion to provide parent perspectives to ACT decision makers, and improve our public schools. With both a great ability to see the broad picture, and a keen eye for detail she has brought a keen intelligence to improving outcomes for student with disabilities, to caring for student and parent mental health, and for better gifted and talented education. She has also been closely involved with work on managing bullying and violence in our school and a member of the ACT Government’s School Education Advisory Committee.

As ACT Education Minister, Yvette Berry, said at the Awards ceremony, “Kirsty has been a tireless advocate for, and friend of public education. I appreciate Kirsty’s open-mindedness and constructive approach to the challenges facing public education. Kirsty is committed to understanding the perspectives of other stakeholders and finding solutions that work for everyone. Kirsty’s approach has always demonstrated deep respect for the work of teachers and school staff. This work has been done quietly, without fanfare and without any expectation of thanks.”

Kirsty explained that part of what motivates her efforts, comes from her grandfather.

“My Pop was a wharfie, a union man from when he started work at 13 years of age. So he had a strong respect for unions, but also, having missed out on education, he was such a supporter of schools and education for all. So education was so valued in my family. That’s part of why I do what I do.”

And her thoughts on being recognised with the award?

“I’ve always advocated for more recognition for P&C volunteers,” she said, “but I didn’t mean me! Though, it really is wonderful.”

See more about our volunteers.