At our P&C... tackling plastic

As the ACT’s single-use-plastics ban comes into effect for a small number of plastic items, some P&Cs are going above and beyond the ban — reducing the plastics they use and pressuring manufacturers to follow suit.

In 2019, Aranda Primary School student Yassine Andrews wrote a letter to the P&C’s committee, through the canteen menu and noting which items created plastic waste. Since then, the volunteer-run committee has been on quite a journey, reducing waste at the canteen by changing the menu, seekingalternative suppliers, and investigating reusable – instead of disposable – food and drink containers.

“Yassine was determined and not easily put off,” Yassine’s mum, Janaline Oh, told us. “Eventually, I was asked to join the canteen committee to help out!”

Merisha Percival, who chairs the canteen committee, says that some swaps were easy. But other top sellers were not so easy to replace – like juice boxes. Pies were also tricky – Mrs Macs are one of the few pie manufacturers which meet the ACT’s tight Nutrition Guidelines, but they are plastic wrapped. 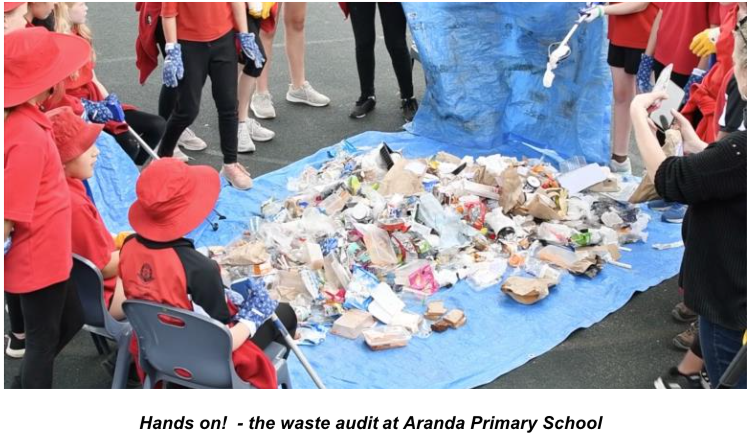 By this time, the school had got involved.

“The school signed up to Plastic Oceans Australasia,” Janaline explained. “This really helped because it has engaged the school. We got a group of eight Year five students from the school’s environment team – our G-Force team – to help.” G-Force was established several years ago by Aranda’s French teacher, Myriam Davies, to encourage Year five and six students to engage hands-on in sustainability at school.

The Plastic Oceans team wrote to manufacturers  of some of the canteen’s popular items, asking them to drop their plastic packaging. And they got at least one piece of good news. Bulla, who make the very popular frozen yoghurt sold by the canteen (but which currently has a plastic lid) wrote back saying that they were “in the process of converting the Frozen Yogurt packaging from plastic to paperboard”.

“Plastic Oceans also suggested we do a waste audit and this was so important,” Janaline said. “We found that 100% of the hard plastic and 75% of the soft plastic in the school waste was from the canteen. Knowing that, and sharing the results with the school community, has created a lot of support for what we are doing.”

The next step was to find out more about what parents wanted.

“We did a survey of parents – and students. We wanted to find out what people did or didn’t like about the canteen, what changes they wanted to see, and whether they would be prepared to pay more for less waste. Nearly two-thirds told us they would pay at least 5% more to get rid of the plastic from an item.”

“We discussed all this at a P&C meeting, Merisha recalls. “We talked about our aims. We were clear about our goal – the canteen is not about making money; it’s to provide affordable food for kids. If it starts to make a profit, we will reduce prices.”

Armed with this clear aim and the survey results, the committee approached local businesses such as Dobinsons and Husk to see if they could source plastic-free pies.

“The nutrition guidelines have made it very hard,” says Janaline. “But we are still trying!”

“We are also investigating reusable cutlery and containers for serving our foods. We have installed a commercial dishwasher to pave the way for this transition, but there are a lot of considerations to take into account. One of our major concerns is the need to manage the workload of our canteen staff.”

Several other P&C-run canteens are also leading the way, working steadily and deliberately to reduce waste. For example, Latham and Ainslie Primary schools students return reusable plates and cutlery to the canteen after use, rather than throwing disposable items in the bin.

In many cases, it has gone hand-in-hand with home-making foods to serve on the reusables. These, in turn, are often healthier than pre- packaged item.

“We’re working on getting the kids into the habit of returning all the reusables, which is a challenge,” Bonnie Roppola, canteen manager at Latham, told us. “Our Year six Waste Warriors help, and we are considering a raffle ticket system to encourage them to come back.”

Latham and Ainslie will share their journeys towards reusables at the next meeting of Council’s Canteen Subcommittee on October 13. How it fits within the Canteen Manager’s time, and potential funding sources for related costs will also be discussed.

This article is part of a series "At Our P&C..." sharing great things that ACT P&Cs are doing and appeared in ParentACTion Magazine, Term 3, 2021.