Many P&Cs are looking to re-invent themselves. So we wondered — if you were to start from scratch, what would your P&C look like? We caught up with Canberra’s newest P&C to find out how they approached it.

Two years ago a small band of volunteers with almost no P&C experience got together at Gungahlin’s Margaret Hendry School to establish the school’s parent association.

Phoebe Phillips joined in so she could meet people, and walked away President.

“Our main focus has been our daily coffee cart and breakfast club,” Phoebe tells us. “It’s a place for parents to meet other families – many are new to Canberra. Each morning there’s probably around 40 people who come along and hang out and chat. Not always the same people, but a changing crowd.”

“On the first week of school we kept that open a bit longer each day so that any parents who were feeling apprehensive could stay around and get some reassurance. If kids are nervous, they can catch up with friends at breakfast club and settle in a bit first. It’s a great place for parents to find out what is going on too.” 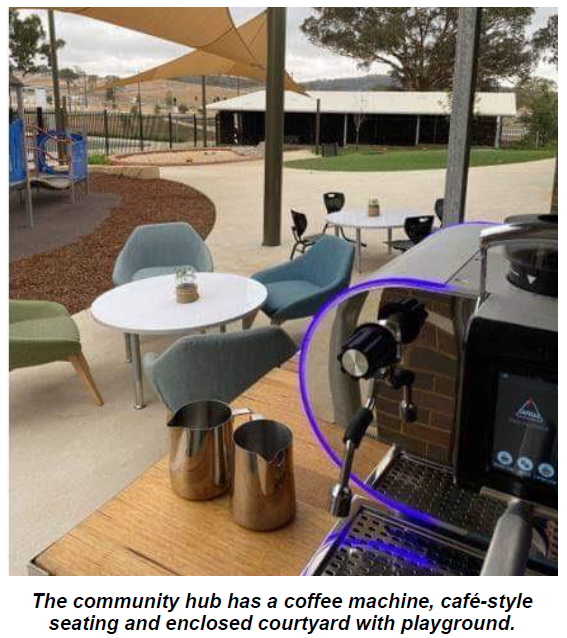 The school community, and P&C, are very fortunate to have a dedicated space – the school’s Community Hub. Phoebe explains: “All our events happen in one place, so people know where everything is – the coffee cart and breakfast club. We have a kitchen and storeroom there. There is an enclosed playground and we’re planning to set up a second hand uniform shop there too. There is room for playgroups as well.”

The focus on community has been supported by the school’s Principal, Kate Woods, and Tammy O’Callaghan, the school’s Community Co-ordinator.

“We’re very lucky to have a great relationship with the school.” Phoebe says. “The Principal comes to all our meetings. The school purchased the coffee cart and started that up. The P&C has now taken it on and we’ve got a roster of parent volunteers who work the coffee machine.”

“Frankies Café at Forde staff actually trained us on it in the beginning and now that’s a new skill those parents have learned, and have passed on to new volunteers as they train each other.”

The community focus seems to be working, according to Tammy.  “Right from the beginning, the school encouraged a community focus, encouraged the P&C to think about what you want to be. The volunteers have been amazing. Families comment that they’ve never had a sense of community at a school like this before.”

Over the next few years we’ll see more new P&Cs in Canberra as new schools continue to be built. So what can they learn from Margaret Hendry?

“It was a lot of learning and a bit touch and go at the start,” says Phoebe, “but we are getting more knowledge and more established now. Council was a good resource. They came out and helped and we used Council’s resources to set up our constitution and incorporate. The $500 seed funding from Council and over $1000 from the Education Directorate really helped.”

“It’s really been worth the initial challenges!”

So, how do they do for volunteers?

“It’s usually the same people, but it’s lovely when surprise people come along. They always bring new ideas. And we are seeing more new faces as the school grows.”

The pandemic was, obviously, very hard, Phoebe tells us. “Our second year in and we couldn’t run a movie night or disco because of COVID. It was tough trying to get established without a bit of fundraising. We did manage an end of year disco hosted by a local dance group. We had a massive turn out and people enjoyed it so much.”

“In our first year, we did a brick fundraiser, which fitted so well for a new school and showcases our inaugural students. The teachers and kids did the decorating in art lessons and then we’ve built a path in the garden with them.”

“We have plans and hope to raise more funds this year. We’d love a school garden where the kids can be involved and use the food they’ve grown.”

The experience at Margaret Hendry shows that growing a community doesn’t happen by chance. It took the help of a dedicated staff member,  information and funding support, a purpose-built space at the school and the attention, time and passion of dedicated parent volunteers.

This article appeared in ParentACTion Magazine, Term 1, 2021. It is part of a series "At Our P&C..." sharing great things that ACT P&Cs are doing.