At our P&C - community fitness classes

Parent associations contribute to their communities in all sorts of ways. At Mount Rogers Primary school, that includes getting people together to keep fit!

For over 20 years parents and members of the community have been turning up at Mount Rogers School for evening classes. They’re not brushing up on their maths, nor learning more about helping kids with readers. Instead, they’re sweating it out in P&C managed exercise classes. 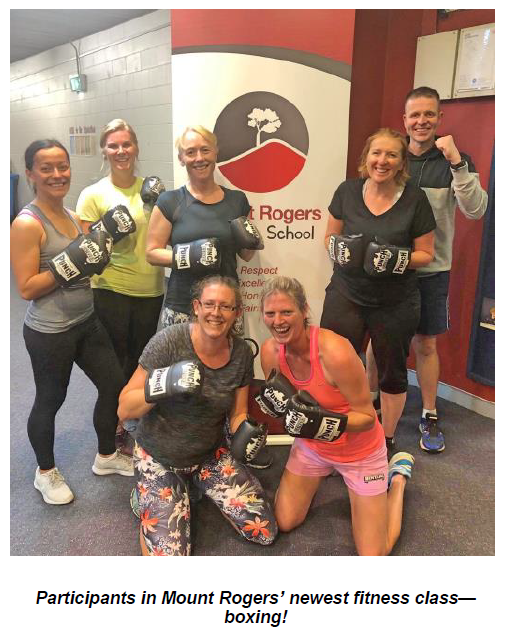 Steph Hinds, who was until recently a parent at the school, co-ordinates the program.

“The P&C pays the instructors. People attend on a casual drop-in basis and pay just $8 for the one-hour class,” she explains. “At the moment we offer group PT-sessions twice a week as well as Zumba and boxing classes.”

As she explained more about the program, it was obvious that their community-based approach offers advantages that you don’t get from a gym – and not just the affordability.

“The classes are popular with parents but the majority of our exercisers are actually older members of our broader community. There is a really special culture in the classes – very safe and non-judgmental.”

The classes are also very adaptable and tailored to community feedback.

“There is a culture of people saying what they need, what they like, and our instructors respond to that and change. The local community, in a way, are creating their own class,” said Steph.

“One participant calls it a ‘hidden gem’!”

“At the end of each year we host a Christmas party for the combined classes. We put on food and drink and chat and celebrate,” explained Steph.

“Each instructor also runs a short 15 minute session so everyone can find out what the other classes are about.”

The sessions are advertised on the P&C Facebook page and a couple of times a year flyers are dropped into local letterboxes, but people also find out through word of mouth. The program is popular, with up 20 people per class, and still growing.

“The classes run all year, rain hail or shine, and over the school holidays,” said Steph. “Participants love that it is consistent. We’ve been doing it for years –   longer than some gyms last in business! One of the ladies has been coming since it began in 1994!”

“The last couple of years the numbers have really picked up. We have just added another class,” Steph told us. “We asked our community on FaceBook what is their favourite way to get sweaty. Lots of people were interested in boxing, so we’ve just added that.”

The program is also a fabulous fundraiser, making around $2000 a year for the P&C. According to Steph, it also gives the community an extra interest in the school.

“We tell them all what the money goes to. They can see that it benefits this immediate space – the soccer goals on the senior playground that they helped pay for.”

It sounds like a program that is kicking many goals at the same time.

This article is part of a series "At Our P&C..." sharing great things that ACT P&Cs are doing and appeared in ParentACTion Magazine, Term 2, 2019.