Liz Moyle from Maribyrnong Primary P&C shares how one fun event got people together, strengthened the school’s sustainability focus and raised funds, all while revitalising parents’ wardrobes!

Australians send an average of 23kg of textiles waste per person to landfill each year. For a school of around 500 students – like Maribyrnong Primary – that means students are likely to discard over 11,000kg of clothes – the weight of two elephants – each year. That’s a lot of trunks!

“So much of what we get rid of could still be used by someone else,” said P&C volunteer and parent at Maribyrnong, Liz Moyle. “I look after the pre-loved uniform shop at the school and that helps re-use the kids clothes.”

Out of that involvement grew a bigger idea – a ‘Swap Not Shop’ evening - to help parents at the school recycle their fashion clothing too.

“The school has a big theme of sustainability. We were keen to work with that.” 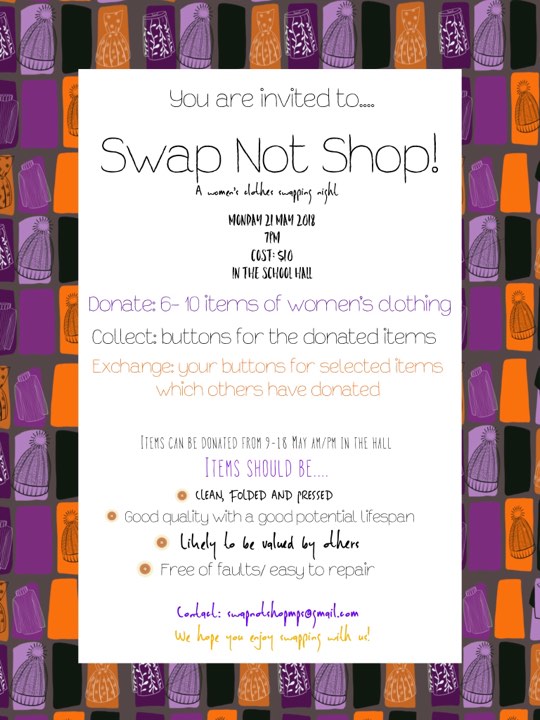 “We set up multiple collection points several times before or after school and advertised these well,” Liz explained. “Parents donated clothing and accessories in good condition that they no longer wanted or wore. In exchange, they received buttons – one per item of clothing – which they could then use to purchase ‘new’ clothing on our ethical fashion night.”

Liz and the team of volunteers then sorted the donated clothing, hats and bags, made it look great on borrowed display racks and planned an evening for the community to attend and do their shopping.

“The event was lots of fun,” said Liz. “We collected a $10 donation to the school at the door. Then we had a presentation on styling, suiting different body shapes, and wardrobe planning from a stylist in the school community who donated her time. Some parents even volunteered to be models!”

Then it was time for people to shop, using their ‘buttons’ or paying $3 per item.

“Afterwards there was tea and coffee and nibbles, while people mingled and talked and looked at some stalls from parents who were selling home-made items like cards or jewelry. In exchange for a stall spot, people running the stalls donated some of their wares which we used as lucky door prizes.”

So, was it a success?

“People who came raved about the evening. It was fun and social,” Liz reports happily. “We raised about $300 for the school but it was more about building connections with our community and following the school’s sustainability theme and values. And it has been fun since then to see people enjoying wearing your pre-loved clothes!”

“We got a great response because it was new and we managed to create a bit of a buzz about it. A talented parent created eye-catching ads and invitations for it.”

“Having the collection points very visible was also important. They became social spots and created interest. The kids also asked why we were collecting, what we were doing, so it meant that we could have great conversations about sustainability with them too.”

“I would encourage all P&Cs to consider whether their community could benefit from a Swap Not Shop event. It was really worthwhile for us and lots of  fun!” Liz said.

It looks like it could give rise to more events in the future.

“This year we focused on women’s fashion. We are wondering about looking at kids’ in the future, maybe focusing on items like coats that are expensive and not usually worn out.”

This article is part of a series "At Out P&C..." sharing great things that ACT P&Cs are doing and appeared in ParentACTion Magazine, Term 1, 2019.