On Monday 3 September Prime Minister Julia Gillard addressed the National Press Club with her long awaited response to the Gonski Review of school funding. In addressing Gonski, the Prime Minister has initiated a National Plan for School Improvement, encompassing many of the issues facing our schools.

In February 2012, David Gonski AC published his review of School Funding. The review found that Australia is failing to invest properly in education and, in particular, in public schools. The review highlighted the fact that over the past decade Australia’s performance has fallen considerably. Australian students are now in a situation where one in seven 15 year olds do not have basic reading skills.

The review recommended a shift in the current funding model that would see considerably more money going into funding education in Australia.

When the review was first released, it was noted that a lot more work still needed to be done. The federal government made it clear that it aimed to enact legislation to commence the implementation of Gonski by the end of this year. Since February, all levels of government and a range of stakeholders, such as Council, have been hard at work to ensure implementation occurs.

The I Give a Gonski campaign

In response to the review and a desire to ensure the reforms envisioned in Gonski are achieved the Australian Education Union (AEU) has launched its ‘I Give a Gonski’ campaign. The campaign allows people to show their support for Gonski and encourages the government to take action on the recommendations in the review.

On Monday 20 August the AEU along with teachers, principals and parents planted hands on the lawns of Parliament House. Over 6,500 hands were planted representing every public school in Australia. Council President Vivienne Pearce attended the event on behalf of Council and parents in the ACT.

“Parents are getting impatient, the current model of funding is broken and needs fixing" said Ms Pearce.

The Gonski model of funding would see schools receive an average amount of funding per student, then an additional loading for certain students to ensure they can achieve their potential. Loadings are recommended for students with a disability, from a low socio-economic background, attending rural or remote schools and indigenous students. The Gillard government have now accepted this funding model principle as one of the new aims under the National Plan for School Improvement.

Prime Minister Gillard announced a National Plan for School Improvement which aims to ensure every student in Australia gets a world class education.

The National Plan for School Improvement draws on a range of issues in education and is not solely based around the Gonski funding model.

The government aims to improve teacher quality with ongoing support for teachers and principals throughout their career. More help will be given to schools to improve their results. The plan aims to inform parents and the school about school performance.

These aims draw on recommendations from the Productivity Commission's research report into School Workforces, the implementation of the national curriculum, increased school autonomy as well as the funding model envisioned in Gonski.

Gillard announced that the National Plan for School Improvement will start in 2014 and be gradually implemented up to 2020. The plan aims that by 2025 Australia will be in the top five countries in reading, writing and mathematics

After the announcement of the National Plan for School Improvement, the federal government launched the Better Schools website (www.betterschools.gov.au).

A range of fact sheets are available to download on the Better Schools website outlining the
numerous proposed projects that now fall under the National Plan for School Improvement.

Still a long way to go

The Federal Government is now negotiating with the States and Territories to see who will provide the extra funding and when.

The I Give a Gonski team is now lobbying our local leaders. You can join in my registering your support online at www.igiveagonski.com.au

By going to www.igiveagonski.com.au/get-on-with-it you can send a letter to ACT Chief Minister Katy Gallagher asking for action on the recommendations of the Gonski review. 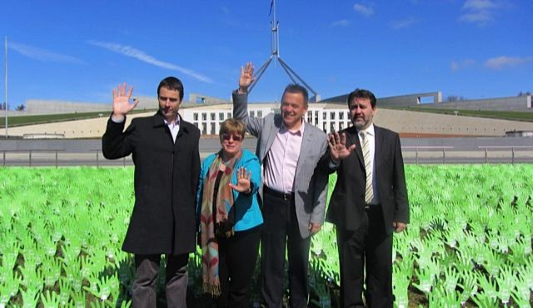