The P&C at Gold Creek School has been live streaming their meetings via Facebook for a  year – to a growing audience. We caught up with President David Pollard to learn more.

The P&C at Gold Creek School has been live streaming their meetings via Facebook for a  year – to a growing audience. We caught up with President David Pollard to learn more.

How can you get more people to your meetings? It’s a perennial question for P&Cs and Council alike. So when David Pollard saw live streaming working for another community organisation, he thought it would be worth a go.

“It is such an easy thing that P&Cs can do,” he said, “so it was definitely worth trying.”

“It was just the same eight people coming to meetings, but there was such great content generated there. We wanted to expand the audience and let more people benefit from what we hear at our meetings.” 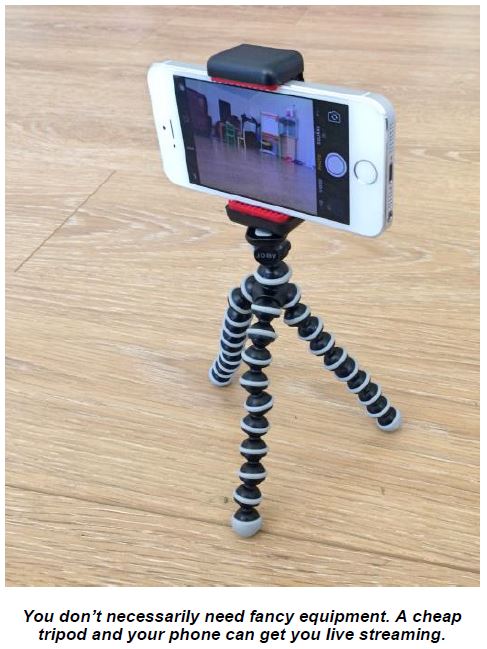 “We don’t stream the whole thing, just 10-15 minutes each time – none of the boring committee stuff like who will buy sausages for the weekend! We only do the Principal’s report, plus a special topic.”

David uses a very simple set up – just a phone on a cheap tripod.

“For the first one, I actually just held the phone. Once we saw it work, we added the tripod which is much better. We find in the quiet room where we have our P&C meetings that we don’t need an additional microphone, just the one on my phone.”

Live streaming on Facebook is simply a matter of opening the Facebook App on a mobile device and hitting the “Go Live” icon. The video then appears on your feed. If you want to livestream from a Page (such as your P&C Facebook page), find the “Go Live” link in the Pages App. People can watch live on your page, or any time afterwards.

Obviously you also need an internet connection. David uses his personal internet package on his phone, but P&Cs could ask their school if they could use the school wifi.

“It’s certainly been a success,” David said. “Now we have eight people in the room, sometimes  a dozen more watching live and more still more watching the video later.”

“The first video got over 200 views and then each time there have been 100 more than the last time! Admittedly only some of those viewers watch the whole thing, but it is still a great response.”

“Both the P&C and school Facebook pages promote the video for a while after each meeting. I also copy it across to YouTube and circulate that link for families who have decided not to have Facebook. We aim to make it as available as possible. In fact, the videos continue to be a good resource for parents on the special topic that was covered in that meeting.  I know parents from other schools who have had a look and found them useful.”

After the Principal’s report, each live stream includes a special topic.

David explained: “This might be something that the Principal wants to cover, like the school improvement journey or the Future of Education consultation. But we also ask parents what they want to be covered. We don’t get many requests, so when there is one we jump on it.”

“One parent asked for bullying to be covered, so school staff spoke about that. Another Kindy parent had questions about helping with home readers so we expanded that to focus on home learning, how that is different from homework, and how to help.”

“We have tried to make it as interactive as possible and encourage live questions. This is still rare, but it is growing all the time.”

When asked whether the faithful eight still turn up to meetings, David told us “Yes”.

“We still have our committee business to do and events to organise once the camera goes off.”

You can take a peek at the videos at www.facebook.com/pg/GoldCreekPandC/videos or via goldcreekschoolpandc.org.au/about-the-pc/meetings-and-minutes/

This article appeared in ParentACTion Magazine, Term 1, 2018. It is part of a series of articles sharing expertise across our P&Cs.