Council is delighted that our busiest school crossings are now safer, with supervisors controlling them before and after school.

Improving the safety of roads around our schools has been a long-term focus for Council. Leading up to the 2016 ACT election, Council worked hard to raise the need for safer crossings with all election candidates after parents and P&Cs repeatedly reported fears for student safety to us.

“We were able to secure a number of promises relating to school traffic and we were extremely pleased when ACT Labor committed to trialling school crossing supervisors,” explains Terry Sanders, Council’s Executive Officer. “It is a great example of what can be achieved when parents from different schools combine to lobby for solutions to common difficulties.”

“It is fabulous to see these supervisors on school crossings after years of parents and Council urging for action. I want to thank all the parents who have worked hard on this issue, and Transport Canberra for making it happen.” 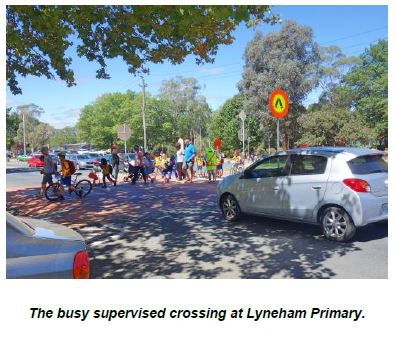 As far back as 2014 Council was hearing so many concerns about traffic at our meetings that we decided to survey parents about school roads. The survey of over 1000 parents showed nearly 70% had witnessed an accident or near miss around their school and nearly two thirds of parents deemed their school roads ‘unsafe’.

“What parents told us was alarming,” says Terry. “School crossings came up as a major concern.

Parents at some schools simply didn’t consider them safe.”

This was the case for Mia Swainson, who walked her kids to Lyneham Primary School most days.

“I had a child in Kindy, plus a toddler and baby with me and often the crossing felt unsafe,” recalls Mia. “Then one day a parent was hit on the crossing, with her kids there with her. It rocked the school community.”

The incident spurred parents into action, counting the number of pedestrians and cars over the crossing on a typical morning.

“We assumed that the ACT had a supervisor program but when we asked, we drew blanks. So I looked into what other states were doing and found that in every other state, with the amount of traffic we were counting on our crossing, we would be eligible for a crossing supervisor.”

The Lyneham Primary P&C began writing letters to Ministers. They also brought the issue, and their research, to Council. Parents created a detailed proposal for a trial of crossing supervisors and, through Council’s regular meetings with the Minister, it was presented to the Minister for Education three years ago.

“Council asked the ACT government for a crossing supervisor program at election time. Labor committed to creating a program if elected. And now we have this program. It is very exciting,” Mia says.

“It is fabulous to know your kids are safe on that last part if the journey to school. It gives us confidence. It really encourages parents to drop kids off part way to school so they can walk the rest of the way.”

Pedestrians are not the only winners. Traffic flow is also expected to be better on the supervised crossings.

Kylie Heffernan, who trains the new crossing supervisors, says the job includes “managing traffic flow so that you don’t get cars backing up, pooling the children together” before stopping the traffic.

She says the system is working well. “It is now a process of educating drivers, pedestrians and cyclists as they get used to how this works.”

Presentations at school assemblies have helped teach the kids the new drill. “The kids are on board. They say ‘wait mum – you have to wait for the two whistles’!”

The trial of school crossing supervisors is in place at 20 schools. Council was part of the panel which assessed need and decided on which schools would be part of the trial.

“Not every school needs supervised crossings and the trial was always limited to 20,” explains Terry. “The panel looked at the size of the school, the traffic volumes which Transport Canberra measured, and things like how popular active transport was at the school.  It was a rigorous and fair process.”

For schools not getting a supervisor for their crossing, there is still good news. Council was also able to secure a promise at the last election for individualised Traffic Management plans for each ACT public school. These will developed over the next few years.

Council expects that the Traffic Management plans will address school-specific traffic difficulties and cover the whole of government including roads, infrastructure, policing, and public transport. “We hope this will address the frustration of many P&Cs and schools in having to deal with multiple agencies,” Terry says.

“We hope the plans will identify simple measures to improve safely and traffic flow around each school, based on their particular circumstances. Our expectation is that they be developed in consultation with parents and the P&C.”

Council encourages parents to get involved. Ask your Principal at your next P&C meeting about your school’s plan.

“In the end, the school crossing supervisor program and Traffic Management plans are about making our schools safer and giving parents more confidence in the safety of school roads and crossings.” Terry says. “We hope this will lead to more students walking to school, which will in turn further reduce traffic problems around our schools.”