New option for food at school

Canteens are one of the most important services that P&Cs provide for schools, but the burden for volunteers is immense. Council’s Communications Officer, Janelle Kennard, investigated a new option for Canberra schools looking to provide a food service without leaning on the P&C.

Supported by an ACT Health Promotion Grant from the ACT Government, the YMCA Canberra has been looking into school canteens and the ways in which schools and P&Cs can be supported to provide a viable, healthy food service for their community. It soon became apparent that one of the significant challenges to the viability of individual school canteens was the limited scale of their market. And there were schools with little or no canteen service that were looking for easy options. So the YMCA began an innovative trial at three lucky ACT primary schools.

“We progressively rolled out the Y’s Bites service during term two, firstly at Charnwood-Dunlop, then Red Hill School and Palmerston,” explained YMCA Grants Coordinator, Diane Percy. “There has already been a fantastic response and orders are increasing every week!” 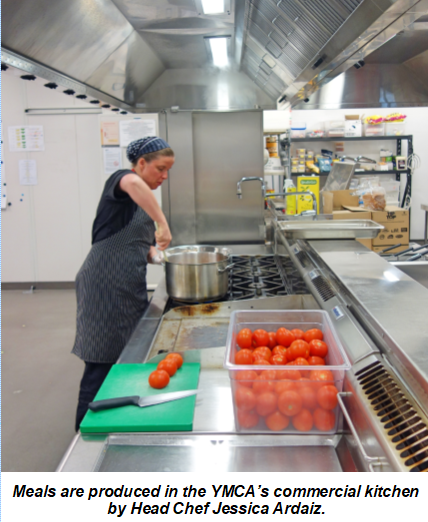 The meals are prepared in a centralised, commercial YMCA kitchen under the supervision of Senior Chef Jessica Ardaiz and in accordance with ACT school food and drink policies. “It’s good healthy food, cooked using quality fresh ingredients,” Jessica told me.

There is a choice of hot meals such as lasagne, chicken enchilada and curry, as well as a range of wraps, salad box, drink or muffin. The YMCA provides materials so that schools can promote the service. Parents order and pay online.

I visited the impressive kitchen as meals were being prepared, packaged and labelled with the child’s name and class. The meals were then transferred into an insulated box and into the van on its way to Charnwood-Dunlop Primary School. It was a relatively small delivery – 25 orders – the day I visited, but the YMCA is regularly delivering around 300 lunches each week to the three schools on the trial.

I met the van at the school. The food was transferred to the school’s canteen where a team of student volunteers eagerly sorted the meals into class baskets, checked off the contents against a list of ordered meals and, donning their special aprons, delivered the baskets to classrooms just in time for lunch.

“The kids just love it,” Diane from the YMCA told me. “They get to participate in delivering the healthy meals and whoever helps gets to wear the Y’s Bites aprons.”

The feedback is very positive on the food, according to Diane. “It’s tasty and fabulous, the kids tell us, and they also like the packaging – it looks ‘cool’, is completely recyclable and the branding is fun and colourful.”

“It is a great service to the parents. The short time frame is challenging for the chef and her team – orders come in by 5pm the night before and are at the school by 11am, for those schools with an early lunch break,“ Diane says. “But our systems are in place now and working well.”

One spare meal is also provided for every 20 ordered, in case there is a mistake or a dropped meal. This is particularly appreciated by the school’s Deputy Principal, Rob Lans, who was enthusiastic about the service. He told me that both staff and students were enjoying the food, that the YMCA had been very accommodating of their needs, and things were working smoothly.

“Other school canteen operators are interested in the Y’s Bites healthy food program, having the option to order healthy pre-packaged snacks and hot meals directly from us which they sell via their own ordering or counter services,” said Diane. “In the future it will make it easier for school canteens to offer a greater selection of healthy lunches on their menu.”