Council’s long and dedicated work as an advocate for parents of students with a disability was recognised at the end of 2013.

In December, Council was awarded the overall Award for Excellence in the ACT Chief Minister's Inclusions Awards which recognise businesses, organisations and individuals which have excelled in encouraging, welcoming and supporting people with a disability. Council also took out the Education and Training section of the awards.

“We are thrilled and proud to have Council’s efforts to raise disability awareness recognised with these awards,” said Council President Viv Pearce. “This is wonderful recognition for all of our dedicated volunteers who have given so much to this area over the years."

The judges’ comments noted that “Council has proactively developed a range of initiatives that show great innovation and provide disability awareness and inclusion in a variety of ways”.  The panel agreed that Council “excelled at improving the educational experience of not only students with disability, but all students.”

Council’s work in the area has included lobbying for and developing extra training for bus drivers. In consultation with parents and a trainer, a package highlighting disability awareness was developed and is now delivered to new bus drivers in the ACT.

The comprehensive guide to disability resources in the ACT Who can help? which Council researched, collated and printed was also influential in the win. The guide was produced with funding from the Federal Government in response to parents’ concerns and frustrations about how information on disability services was fragmented and hard to find.

Council collaborated with the Education and Training Directorate and Disability ACT to ensure the booklet was delivered to every child with a disability currently in school.

“The resources guide has been so popular that we had to have a second print run in its first year,” said Ms Pearce.

The judging panel also noted Council’s commitment to making disability and accessibility a focus when planning school activities and Council’s input into the Everyone, Everyday teaching resource, a program which develops understanding and awareness of disability from Kindergarten to year six, and featured in the previous edition of ParentACTion.

In addition, Council has worked on a number of committees to lobby and advocate for greater understanding and improved services; providing an effective voice for parents of children with a disability.

Others recognised in the awards included

“This award highlights our success in lobbying for and supporting parents,” said Ms Pearce. “If parents have issues which have not been solved at a school-level, we encourage them to bring these issues to Council through their delegate.”

Copies of the Who can help? resource booklet are available from Council’s office. 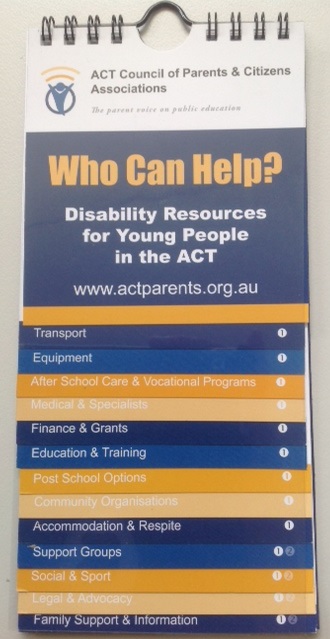 Council would like to thank our dedicated volunteers who have worked passionately on inclusion.

This article appeared in ParentACTion, Term 1, 2014. See other past editions of our quarterly magazine.